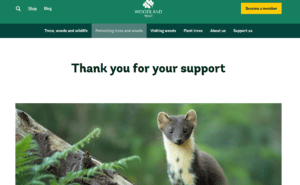 We’ve now opened Mourne Park to the public. Be among the first to visit the site in centuries and discover stunning vistas, ancient woodland, and iconic wildlife.

46 hectares are for sale – The land we want to buy is right next door to Mourne Park, a site we purchased in 2021.
£5.2 million is what we need to raise – We have until the end of the year to secure it. With it we’ll be able to extend Mourne Park, plant thousands of trees, and bring its ancient woodland back to full health.

Northern Ireland has just 8.7% woodland cover, making it one of the least-wooded countries in Europe. Ancient woodland in Northern Ireland is exceptionally rare – covering just 0.04% of the land. There’s no right to roam either, very few public rights of way, and bridleways don’t exist.

In 2021 we were given the chance to buy 156ha of Mourne Park, one of the largest areas of ancient woodland in the island of Ireland. Just outside Kilkeel in County Down, Mourne Park is situated halfway between Dublin and Belfast, in the tourist hotspot of the Mourne Mountains Area of Outstanding Natural Beauty.

But Mourne Park itself was barred to most visitors. The stunning vistas, shady riverside walks, and iconic wildlife, such as otters, pine martens, and red squirrels, were hidden away from view behind locked gates. We’re proud that our sites are free and open to the public so, as you can imagine, we relished the chance to change that.

Now, having thrown open Mourne Park’s gates to allow free, public access for the first time, we need your help. A total of 46 hectares of additional land has come up for sale! It’s a chance we mustn’t miss.

What will your donation help us achieve?

By donating to our Mourne Park appeal, it’s not just the purchase price of the extra land you’ll be funding.

The new parcel of land is perfect for tree planting. If we can acquire it, we can buffer and protect Mourne Park’s precious and vulnerable ancient woodland, expanding existing wildlife habitats and forming a protective barrier of 100,000 native trees.

Mourne Park itself needs work. Almost three-quarters of the historic and rare ancient woodland is choked with damaging invasive non-native species, such as laurel and rhododendron, and in need of our expert restoration work. We’ll be bringing the woods back to full health, so the natural regeneration of native trees can begin alongside the new planting we’ll be carrying out on the extension.

Mourne Park’s existing hedgerows are patchy and degraded. Our work will re-establish them as the vital wildlife corridors they need to be. We hope the new planting will also expand the range of rare and precious species – such as the red squirrels and pine martens that already call the wood home.

We’ll open up the wood for people to explore

Mourne Park flanks our site Aughrim Hill, currently the largest native woodland planting project in Northern Ireland. It is also directly linked to Forest Service coniferous woodland. However, there are currently no formal trails. With your help we can connect and link each area, offering a vast wooded landscape for people to explore.